A great deal is being written these days about electromagnetic therapy and its potential to alleviate adverse symptoms of mental health as well as neurological conditions. Among the different available treatments is repetitive transcranial magnetic stimulation (rTMS), which has gained a particular appreciation thanks to its proven safety and efficacy in treating a number of diagnostic disorders.

So what is this treatment? How does it compare to some of the other medical device treatments on the market? Who is likely to gain the most from it?

Read on to find out.

Repetitive transcranial magnetic stimulation, or rTMS, is a medical device treatment for a number of mental health and neurological conditions. It has been publicly available since 1985 which has been recognized by the FDA and scientific community at large as a safe and effective treatment option.

The term repetitive transcranial magnetic stimulation refers to several of the treatment’s major aspects. It relies on electromagnetic fields that are activated by its medical device equipment, before being repeatedly projected toward specific areas of the brain at a magnitude confirmed to be safe to the patient’s health and well-being. Repeating this process helps regulate the neural activity of brain structures found to play a crucial role in the appearance of certain mental health or neurological conditions, so that over time rTMS is able to reduce their symptom severity and frequency.

There is no practical difference between rTMS and simply TMS, with the two terms being interchangeable. On a semantic level, the term rTMS emphasizes how repeating the TMS process is necessary to establish the neural activity regulation provided by this treatment.

There are currently two forms of rTMS on the market, usually referred to as traditional TMS and Deep TMS. Each works in its own way to treat the targeted condition. 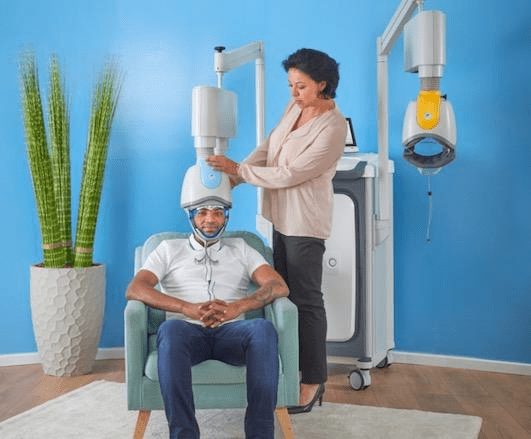 Traditional transcranial magnetic stimulation relies on a standard figure-8-shaped handheld device to convey its electromagnetic pulses to the brain. During the traditional TMS treatment process, the mental health practitioner holds the device over the area of the brain estimated to hold the sought-after structure. Though found to be effective, due to its reliance on a handheld apparatus, traditional TMS can run into targeting issues and miss important brain structures during treatment.

Traditional TMS has been FDA-cleared since 2008 to treat depression and since then one traditional TMS company has been cleared to treat OCD (though it has yet to be clinically proven for the treatment of OCD).

Deep Transcranial Magnetic Stimulation (Deep TMS) was made publicly available in 2013 and addresses some of the issues raised by its predecessor. Specifically, Deep TMS relies on its own, patented H-Coil technology to transmit its electromagnetic pulses. The H-Coil is held inside a cushioned helmet, which is fitted onto the patient’s head. This allows the projected electromagnetic pulses to safely reach wider swaths of the brain simultaneously, thereby avoiding the targeting issues met by traditional TMS. Additionally, Deep TMS manages to reach deeper areas of the brain directly, which can also help regulate relevant neural activity.

How is rTMS Different from ECT?

In addition to the previously mentioned variations on rTMS, it is also sometimes compared to electroconvulsive therapy (ECT). But while the two treatments utilize electrical currents as part of their processes, they differ in certain key regards.

ECT was first used as a treatment for schizophrenia during the ‘60s-’80s. It sends out electric pulses that induce a series of brief seizures. This in turn stimulates the brain and affects the pace and rate of its neural firing.

Since its initial usage, ECT has been shown to be highly effective in cases of treatment-resistant depression and is considered by many mental health professionals to be the most effective antidepressant treatment. That said, it does come with certain significant disadvantages. Firstly, a common ECT side effect is short-term memory loss, which deters many patients from undergoing this treatment. Secondly, ECT necessitates the use of anesthesia, making this a more complex treatment than other alternatives, such as medication or psychotherapy, which do not require sedation.

rTMS, on the other hand, does not require anesthesia and does not usually incur any long-lasting or adverse side effects. As a non-invasive treatment, it can be combined with other forms of treatment, such as psychopharmacology or psychotherapy, and can be incorporated into the patient’s daily schedule.

rTMS has several key advantages as a mental health or neurological treatment. Both forms of this treatment—traditional and Deep TMS—have been repeatedly proven to offer significant symptom alleviation from a variety of mental health and neurological disorders. Its ability to safely modulate the neural activity of the brain helps bring relief to individuals who had long contended with depression, OCD, and other disorders; providing them greater well-being and hope for a brighter future.

rTMS also has the advantage of being a non-invasive treatment, which does not require anesthesia. This allows patients to receive mental health support by undergoing rTMS treatment without halting their daily routines.

Due to its non-invasive nature, rTMS does not clash with other forms of mental health therapy. As a result, it is frequently combined with antidepressant medications

Possible Side Effects and Complications of rTMS

rTMS does not frequently cause any severe long-lasting side effects or complications. Some of the more common side effects from this treatment include passing headaches, mild jaw pain, or mild pain at the targeted area of the skull.

rTMS side effects are considered significantly more tolerable than some of the side effects that can occur with other forms of treatment. In addition to the above-mentioned memory loss caused by ECT, many patients who take antidepressant medication complain about this treatment’s detrimental effects on their sex drive and weight, making many discontinue taking it. Who is rTMS Suitable For and Who is Not?

As with any medical or mental health treatment, a certified medical professional with knowledge of the patient’s health should be consulted before deciding to begin this form of treatment. That said, due to its effectiveness and non-invasive nature, rTMS is generally considered an option for patients of varying conditions and symptomatology.

Specifically, patients who have been found to be treatment-resistant after already finding at least two types of medications to be ineffective, could significantly benefit from rTMS. The different mechanisms included in rTMS vs. psychopharmacology help both forms of therapy affect the neural pathways in their own unique patterns, giving rTMS the potential to offer treatment-resistant patients the relief that had previously evaded them.

Patients who have found psychopharmacology to offer some level of relief could also stand to benefit from rTMS. The non-invasiveness of this treatment makes it possible to work well with other forms of treatment, thereby improving patients’ response to their overall treatment plan.

Patients who are afraid of needles, concerned over adverse side effects, or do not wish to undergo an extended recovery period may find rTMS to be a viable option. Many patients who undergo this treatment have reported finding their initial worries over possible side effects to have dissipated, after experiencing rTMS for themselves. The lack of significant or long-lasting side effects due to rTMS allows patients to continue with it, increasing their chances of experiencing beneficial results from a full treatment course.