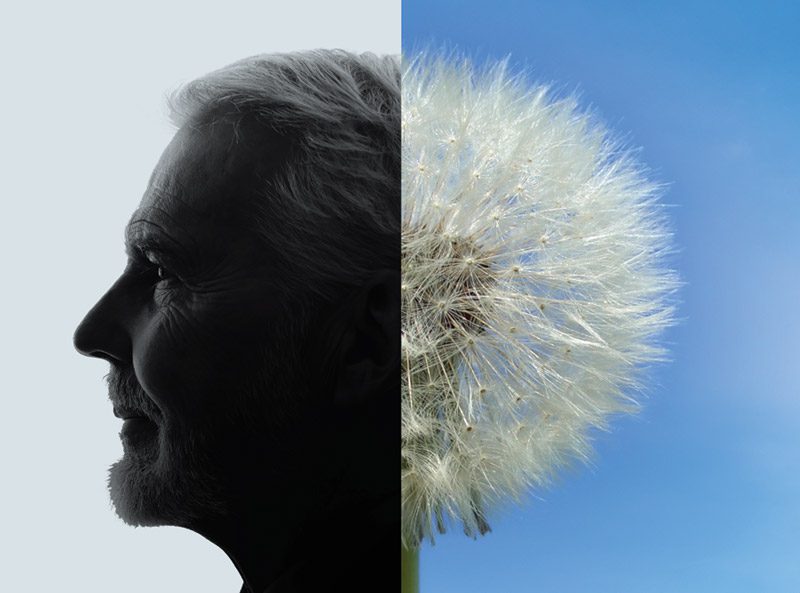 Alzheimer’s disease is a major cause of severe cognitive decline in the aged. The primary cognitive deficiencies are revealed in working memory, language, executive functions, attention, and long-term memory.

Alzheimer’s disease is characterized by a progressive deterioration of cognitive and global function. In the early stages of the disease, complex behaviors (such as driving) are compromised, along with short-term memory, and sometimes behavioral problems, such as anger or aggressiveness, may occur. In later stages, dementia – a characteristic symptom of Alzheimer’s disease, as well as of other chronic brain diseases – may ensue. Dementia is a neurological condition characterized by impairment of memory, understanding, rational thought, language skills, orientation, emotional control and judgment. Patients with dementia lose the ability to perform basic functions, such as talking, using the lavatory, eating and sleeping, and suffer severe memory impairment, to the point of not being able to remember their own name and identity. As life expectancy in the Western world increases, so does the prevalence of Alzheimer’s disease.

There is no known cause for Alzheimer’s disease, but there are factors that place individuals in a high-risk group. The most significant of these is age – the disease is most common among elderly people, with one in every three people aged 85 years or older having Alzheimer’s disease, although in a small percentage of the population onset of the disease occurs as early as the seventh decade of life. Other factors which may contribute to the disease are a vitamin B12 deficiency (for instance, in vegetarians), alcoholism, brain tumors, family history of the disease and gender – women are in a higher risk group than men (possibly due to their longer life expectancy). Research has shown that education confers protection against Alzheimer’s disease.

The average time from first diagnosis of the disease until death is 10 years. The progress of the disease is followed by administering the Mini Mental State Examination (MMSE), which assesses dementia through a set of daily questions (e.g. patients are asked to name the day of the week, or the time of day). The MMSE has a maximum score of 30 points. A healthy subject scores 29 points on average, and the MMSE score of an Alzheimer’s disease patient drops by three points a year on average.

The only treatments approved for use by the FDA are treatments with medications that inhibit the breakdown of the neurotransmitter acetylcholine. The brain cells that are most affected during the early stages of the disease are acetylcholine-secreting cells. These medications slow or arrest the progression of the disease in up to one third of patients. Their side effects include nausea, vomiting, mild muscle cramps and sleep problems.

Treatment of the disease is mainly hampered by its late diagnosis – typically made when 70% of the patient’s brain cells have been damaged. The reason the diagnosis is made this late is that normal function is possible even with extensive neural damage, such that the affected individual and his environment often do not suspect a problem. It is possible that currently available drugs would be found to be more effective if the disease could be diagnosed earlier.

It is an outpatient procedure and does not require hospitalization or anesthesia, is generally well tolerated and entails minimal systemic side effects*.

BrainsWay’s safety study on healthy subjects indicated that Deep TMS therapy, as opposed to standard TMS therapy, positively affects spatial memory in several standard tasks. These effects were observed after application of Deep TMS Therapy over deep prefrontal cortical regions. However, we plan to test the effects of stimulation on other areas as well.

BrainsWay’s treatment is approved by the CE* for treating Alzheimer’s disease.

In one case study of an Alzheimer’s disease patient whose SPECT scans showed evidence of cortical hypoperfusion mainly over the cortical mantle (in accord with the specific pattern of cognitive deficits exhibited by this patient), we placed the BrainsWay Deep TMS H2-coil over the anterior left hemi-cranium, where the calculated effect should arrive at the ipsilateral prefrontal cortex and at the dorsal septal region with its major cholinergic nuclei.

A wide variety of neuropsychological tests were applied before, during and after one month of daily treatment with the H2-coil. Clear improvements were demonstrated in orientation, visual memory, executive functions and confrontation naming. The effect on other cognitive domains was equivocal. The patient demonstrated a significant improvement in affective state, which was confirmed by her family members.