Transcranial Magnetic Stimulation (TMS) is a non-invasive treatment process that has been clinically demonstrated to offer relief from a number of mental health conditions. The treatment utilizes magnetic fields to affect brain activity linked to symptoms of the targeted mental health condition. BrainsWay’s Deep TMS (dTMS) treatment offers a particularly high level of efficacy thanks to cutting edge technology that directly affects deeper and broader regions of the brain while maintaining a safe level of activity.

As a non-invasive treatment option, Deep TMS manages to provide a safe form of therapy for several mental health conditions. This is carried out by generating magnetic pulses that influence the brain’s neural activity, without any invasive procedures or the need for anesthesia.

During the dTMS process, a cushioned helmet holding BrainsWay’s patented H-Coil technology is fitted onto the patient’s head. An electromagnetic field is then activated through the H-Coil, sending out magnetic pulses that are able to directly, yet safely stimulate neurons in deeper brain structures.

Studies on Deep TMS have consistently found it to be a safe treatment with no lasting, substantial or systemic side effects. A 2007 study published by Clinical Neurophysiology, for example, determined that Deep TMS is a well-tolerated treatment option, with no adverse physical or neurological side effects.

The treatment’s direct reach of deeper structures, together with its wider scope, ensure a higher level of effectiveness without increasing pulse intensity to a level that risks undesirable side effects. It also ensures that the desired brain regions are captured without requiring secondary navigation equipment.

A number of studies have found Deep TMS to effectively alleviate symptoms of mental health conditions. A 2015 multicenter, sham-controlled study published in World Psychiatry, for example, found that roughly one out of three patients with treatment-resistant major depressive disorder (MDD) achieved remission after four weeks of dTMS treatment during the acute phase. The study also found that ­­­­­­­­­­nearly 80% of patients who did not immediately respond during the acute treatment phase, experienced improvement during the following continuation phase. 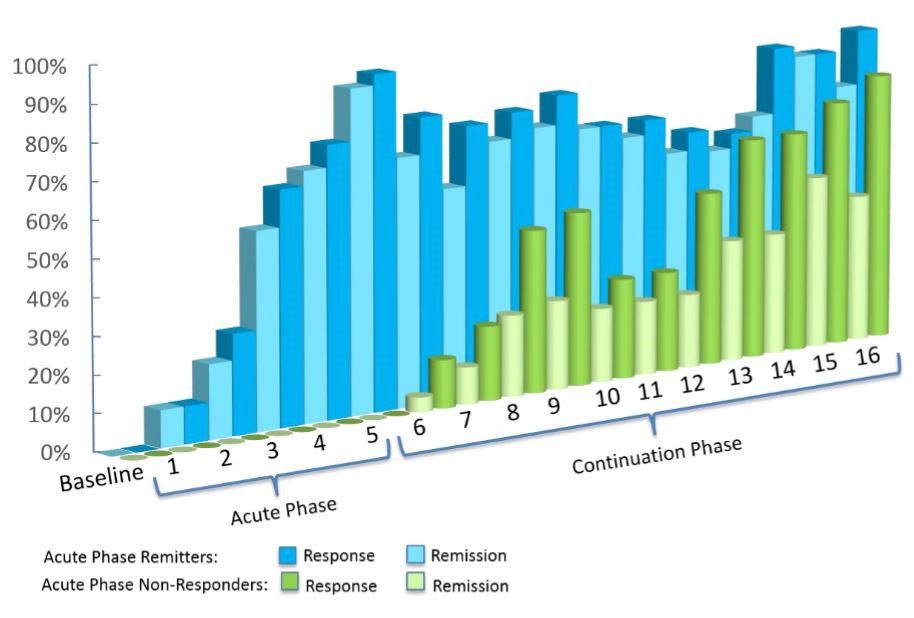 Deep TMS was found to have an even greater level of efficacy among patients receiving treatment in a real-life setting, meaning outside of a rigorous clinical study. Of recorded data for over 1000 participants undergoing MDD treatment, roughly 75% achieved a clinical response due to dTMS treatment, with one out of two patients achieving remission.

Another study published in 2019 in The American Journal of Psychiatry highlights Deep TMS’s efficacy in alleviating symptoms of OCD. The study found that a six-week course of BrainsWay’s Deep TMS treatment provided more than one in three patients with obsessive-compulsive disorder (OCD) significant symptom relief, with results similar to those of a 12-week pharmacotherapy treatment course.

The study’s high response rates included patients who had previously been unresponsive to medication and/or psychotherapy, which constitute a substantial portion of OCD patients. These patients’ improvement was sustained through at least 4-weeks beyond the conclusion of treatment. Assessment of the long-term durability of treatment is still ongoing.

The benefits of Deep TMS have been recognized by the FDA, which granted it clearance status for both MDD and OCD. The treatment is also CE-marked in Europe, to treat these and several other mental health conditions.