What Are the Available Treatment Options for Depression?

What are the Options for Depression Treatment?

Mental Health Education » What Are the Treatment Options for Depression?

Depression, defined by the American Psychiatric Association as major depressive disorder (MDD), is a mood disorder characterized by a substantial decrease in an individual’s quality of life on a number of levels. It is marked by feelings of emptiness, sadness, and a lack of hope or pleasure, in addition to thoughts and actions that significantly impair daily functioning. Thankfully, there are several depression treatment options currently available.

Depression affects roughly one in 15 adults, or 6.7% of this population. One in six people (16.6%) will reportedly experience depression at some point in their life. A number of treatment options have been shown to safely and effectively treat depression. These include Deep TMS, psychotherapy, psychopharmacology and ECT.

Deep Transcranial Magnetic Stimulation (Deep TMS) is an FDA-cleared, non-invasive medical device treatment that utilizes a magnetic field to safely regulate neural activity in brain structures found to be associated with MDD. Deep TMS does not require any anesthesia and can be incorporated into an individual’s daily routine.

Extensive research has proven Deep TMS’s efficacy in alleviating symptoms of depression. As a result, it was granted FDA clearance status in 2013 for treating MDD.

As a non-invasive depression treatment option, Deep TMS is safe to undergo as a standalone treatment or in combination with antidepressant medication. This was reaffirmed by a 2019 study published in the Journal of Psychiatric Research, which not only found Deep TMS to be a safe course of treatment, but that it resulted in significantly higher remission rates when combined with pharmacotherapy, when compared to pharmacotherapy alone. 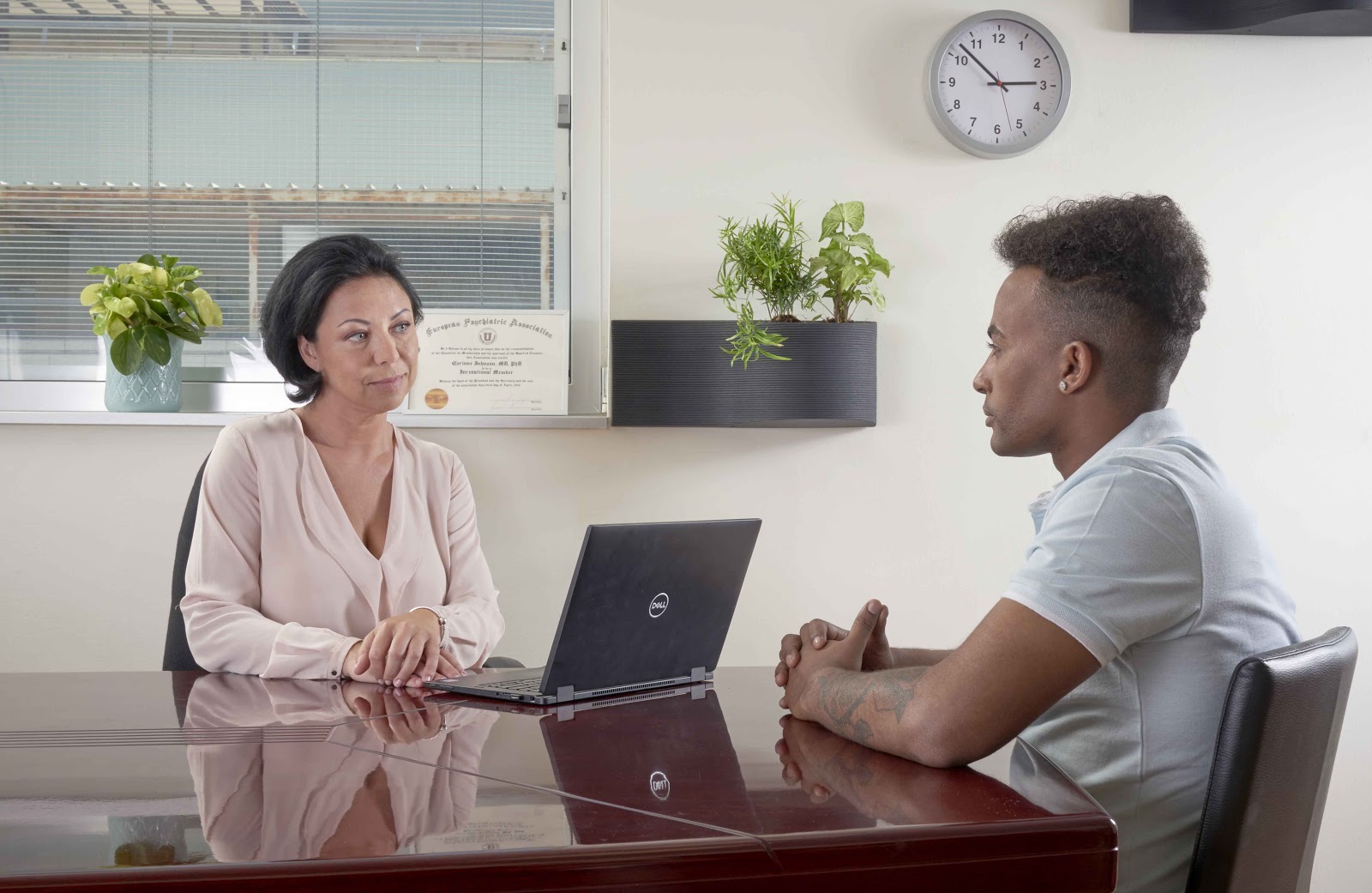 Psychotherapy has been proven to alleviate symptoms of MDD, with many patients finding solace in sharing their own experiences while considering the different factors that may have contributed to their condition. There are many therapeutic approaches, schools of thought and training facilities, with some found to be more effective in alleviating different mental health conditions or working through specific personal challenges. Another factor is the personal connection that develops between each patient and therapist, while a third factor consists of the technical aspects of the therapeutic setting, such as session costs and time availability. It is advised to take all these aspects into account when considering psychotherapy.

Despite an ongoing debate over the classification and “generations” of the different available antidepressants, there are five, generally agreed upon classes of depression medication currently on the market:

MAOIs are another first-generation class of antidepressants that has been available since the early 1950s. MAOIs cast a wide net, attempting to regulate the activity of a number of neurotransmitters implicated in the appearance of depression. Specifically, MAOIs work by blocking the activity of the monoamine oxidase enzyme, which helps break down the neurotransmitters serotonin, norepinephrine and dopamine. As a result, MAOIs maintain the above neurotransmitters’ period of activation for longer. MAOIs are less commonly prescribed these days, due to its adverse, possible side effects, which include increased blood pressure. Nardil is one of the more well-known MAOIs.

Like MAOIs, TCAsare also considered first-generation antidepressants. This class of medications was initially offered to patients with depression in the late 1950s. This class of medications blocks the reuptake of norepinephrine, a neurotransmitter that has been linked to mood and mood disorders. In a similar vein to ECT, TCAs are considered to be very effective in treating depression, while also causing significant side effects—in the case of TCAs, these include blurred vision and increased heart rate. As a result, many patients opt to stop this treatment. Due to their adverse side effects, these days, psychiatrists and other mental health professionals tend to prescribe other types of antidepressants before suggesting TCAs, such as SSRIs or SNRIs. Elavil is one widely available type of TCA.

SSRIs are FDA-approved as a first-line, safe and effective treatment for depression, and have been prescribed as such since the mid-1980s. This second-generation class of medications focuses on another mood-elevating neurotransmitter, called serotonin. By blocking its reuptake process, SSRIs prevent neurons from absorbing the released serotonin back from the synaptic cleft. This keeps serotonin active within the body for a longer period of time, allowing it to have a more beneficial effect on the individual’s mood and alleviating the adverse symptoms of depression. Shown to be about as effective as the TCAs that came before them, SSRIs have significantly less severe side effects. That said, while they are generally considered to be well-tolerated, SSRI side effects have been known to cause certain patients to discontinue treatment. Weight gain and sexual dysfunction are among their more commonly cited side effects of this class of medications. Prozac is the most well-known SSRI available.

SNRIs have been widely available since the mid-1990s, and are considered a third-generation antidepressant. SNRIs offer a hybrid between the efficacy reported early on with TCAs, as well as that associated later on with SSRIs: by blocking the reuptake processes of norepinephrine and serotonin, SNRIs tap into both neurotransmitters’ effects on the depression process, and are therefore able to “double up” on paths toward symptom relief. SNRIs are also considered a more tolerable antidepressant: its reported side effects are similar to those of SSRIs—particularly weight gain and sexual dysfunction—just not as severe as those of their predecessors. Cymbalta is among the more popular SNRIs.

As the name suggests, atypical antidepressants are more of a mixed bag of options that do not fall under the previously mentioned categories, than a single, cohesive group of antidepressants. Atypical medications affect the activity of the neurotransmitters serotonin, epinephrine, norepinephrine, dopamine or a combination thereof in their own, unique way: Wellbutrin, for instance, acts as a reuptake inhibitor for dopamine, while Remeron blocks the brain’s epinephrine receptors, extending the neurotransmitter’s period of activation. Due to the diversity of this grouping, many atypical antidepressants do not share the same side effects. Nonetheless, most of the medications included in this category are reported to commonly induce dizziness, dry mouth and lightheadedness. Wellbutrin, specifically, is sometimes chosen as an alternative or supplemental depression treatment course, as it is one of the few available antidepressants not to interfere with the patient’s sexual functioning.

Electroconvulsive therapy has been around since the 1960s, and was originally used to treat schizophrenia, before it was discovered to be even more effective as a treatment for mood disorders such as depression.

ECT works by activating a brief set of seizures in an effort to establish a new rhythm within the brain’s neural functioning. Due to the intensity of the treatment, those undergoing ECT must be sedated during its sessions.

ECT is presently considered one of the most effective treatments for depression, and particularly for treatment-resistant depression, offering hard-won symptom relief to those who have struggled to achieve it.

If ECT is such an effective form of therapy, why, then, is it not considered a first-line treatment for depression? The answer lies in the adverse side effects that often arise from it, most notably, short-term memory loss. Patients who have undergone ECT sometimes experience a lakuna, or memory gap, during treatment, causing the process itself to be daunting for those considering it.

Even beyond its actual, reported side effects, ECT has gained a rather negative reputation within popular culture and media. Commonly referred to as “shock treatment,” ECT is often depicted as an extremely painful, and even traumatic treatment process that indiscriminately “fries” the brain. The dearth of misinformation about ECT serves as further deterrence to those battling severe and treatment-resistant depression, many of whom fear irrevocable damage from this treatment.

Due to its great levels of efficacy, with its possible, severe side effects and perception as a potentially dangerous treatment, ECT is usually only recommended in cases of severe, treatment-resistant depression. First-line treatments, such as SSRIs or psychodynamic therapy, are usually offered first. Only after such less invasive options have proven to be ineffectual, will ECT normally be considered.

When weighing one’s treatment options, it is important to bear in mind that different treatments not only come with their own, possible side effects, but that it may take time to find the right dosage or combination of treatments that work best for them. It is also imperative that patients consult their doctor regarding their mental health status, the possibility of a major depressive disorder diagnosis, and a possible interaction with other forms of treatment they are already taking.