Is There a New Way to Treat Major Depressive Disorder?

Mental Health Education » Is There a New Way to Treat Major Depressive Disorder?

Transcranial magnetic stimulation (or TMS) is a well-established major depressive disorder treatment that has been gaining traction as an effective option for those battling this condition. With the efficacy and safety of TMS repeatedly confirmed by a number of studies, more patients are turning their attention to this FDA-cleared treatment to alleviate their symptoms of depression.

There are currently two versions of TMS available to the public: traditional TMS and Deep TMS. Both versions’ efficacy lies in their ability to target brain structures found to be related to the appearance of depressive symptoms and regulate their neural activity. This in turn helps with both the frequency and severity of the symptoms that make up this disorder. Transcranial magnetic stimulation, or TMS, is a more recent development in the fields of mental health treatments. Offered to the public since 1985, this treatment utilizes electromagnetic fields to safely and effectively regulate the neural activity of brain structures associated with depression, as well as other mental health conditions.

Is TMS for Depression Appropriate for Any Age?

Deep TMS is currently offered to adults, from the age of 18. Traditional TMS can vary in accordance to each company and provider’s setting of limitations.

Who is Certified to Administer TMS Treatment?

Different countries and states have different specifications as to who is allowed to offer patients TMS therapy. In the US, for instance, a licensed psychiatrist is universally permitted to administer this treatment. On the other hand, various states within the US allow other types of physicians, nurse practitioners, physician’s assistants, and registered psychologists to offer this procedure.

Another distinction to keep in mind is reimbursement. While a certain country or state may allow a relatively wide range of mental health professionals to perform TMS, it is important to verify with your insurance provider which professional is covered by your policy. This is necessary to ensure you will get reimbursed if you decide to go to a specific practitioner for this treatment.

The two presently available versions of TMS are traditional TMS and Deep TMS. Their techniques and technology differ from one another and as a result offer different levels of accuracy and efficacy:

Traditional TMS: The original handheld iteration of TMS from 1985 is sometimes referred to as traditional TMS. This version has shown positive results in treating depression and received its FDA clearance status for treating depression in 2008. That said, certain targeting issues can prevent this treatment from effectively regulating the different brain structures involved in this condition. Due to its focus on relatively smaller areas of the brain, targeting issues can arise leading to missing a crucial brain structure during its activation. To mitigate this concern, additional neuronavigational equipment is sometimes added to this treatment in an effort to simultaneously reach several of the brain structures associated with the targeted condition.

Deep TMS: An advanced form of this TMS, Deep TMS has been FDA-cleared since 2013 to treat especially difficult treatment-resistant patients of depression. Deep TMS uses its patented H-Coil technology to reach wider swaths of the brain, thereby avoiding the targeting issues sometimes associated with traditional TMS. It also manages to reach deep areas of the brain directly, where several structures relating to depression reside, contributing to Deep TMS’s efficacy without detracting from its safety. This allows Deep TMS to successfully alleviate the symptoms of this complex and persistent condition. 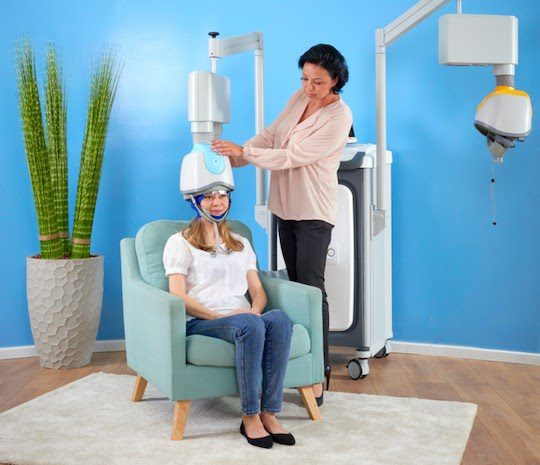 Assessing the success of TMS requires an understanding of depression to allow patients to monitor how this treatment is affecting the condition they are facing.

Major depressive disorder is a mood disorder that has been researched throughout history, which can greatly hinder a patient’s well-being. It is commonly marked by various forms of absence. Patients with depression often report feelings of emptiness, loneliness, loss of energy, lack of pleasure, and hopelessness. Many also describe depression as a feeling akin to sadness, though unlike depression, sadness tends to pass more quickly and usually does not disrupt the individual’s daily functioning for a significant period of time.

Depression affects about roughly one in 15 adults or 6.7% of the general adult population. Within the US, 17.3 million adults, or 7.1% have stated they have experienced at least one depressive episode during their lifetime. Though it can appear at any age, the onset of depression increases during puberty and peaks in the 20s.

The Diagnostic and Statistical Manual’s 5th Edition (DSM-V) lists MDD as part of the depressive disorders family. It goes on to define this condition through the following central symptoms:

An MDD diagnosis requires that the above symptoms be present for an extended period of time and cause significant impairment of functioning within the context of major areas of life. These can include the individual’s occupational environment, family life, and circle of friends.

Causes for depression vary widely and can include a number of risk factors: Many individuals facing this condition are eager to learn what is the outlook for someone with major depressive disorder.

Several factors have been shown to hinder the chance of recovery. They include a longer duration of meeting MDD criteria, symptom severity, and the existence of psychotic features.

Two other forms of treatment have been proven to offer safe and effective relief from depression: selective serotonin reuptake inhibitors medication (SSRIs) and psychodynamic therapy. Both are FDA-approved to treat depression and are considered a first-line treatment for this condition.

Several types of antidepressant medication can be prescribed to treat depression. Among them, selective serotonin reuptake inhibitors (SSRIs) have been found to offer the best combination of safe and efficacious pharmaceutical treatment.

Though many patients report SSRIs to successfully alleviate their depression symptoms, antidepressants may cause adverse side effects and may require a period of exploration before the optimal type of medication and its dosage are determined.

Psychotherapy, and specifically psychodynamics, is also considered a first-line treatment for depression. Psychodynamic therapy offers patients a safe environment in which to discuss the relationships and experiences that may have contributed to their depression. Over time, patients hopefully become more conscious of these factors in their life and life story. They begin to come to terms with some of what they have gone through and develop a sense of acceptance that can help them work through the adverse symptoms of their condition.

Further Actions to Help with Depression

Due to depression’s diverse and widespread effects on the patient’s life, treating this condition may necessitate a multi-pronged approach. As such, many patients incorporate beneficial changes into their daily routine to enhance their ability to fight against depression. Depression has been linked to several life choices, such as poor eating habits, a lack of exercise and smoking. In addition to their detrimental effects on an individual’s longevity, these life choices contribute to the development of cancer, obesity, and heart conditions.

On the flipside, smoking cessation, regular exercise, and adopting a healthy diet have been shown to be associated with alleviating symptoms of depression. For these reasons, all three are considered beneficial choices that can have significantly positive effects on the well-being of those contending with depression.

Online and community sources of mental health support can be an important part of an individual’s overall support system. Reaching out to a helpline volunteer after regular working hours, or joining a support group for those dealing with depression or additional conditions, can ease an individual’s sense of loneliness, and feel heard, sometimes at their darkest hours.

Organizations like The National Alliance on Mental Illness (NAMI), The Anxiety and Depression Association of America (ADAA) and Mental Health America (MHA) all offer support to those in need, and can be contacted for additional sources of information.