What is Major Depressive Disorder?

It is estimated that over 15 million Americans suffer from Major Depressive Disorder (MDD). MDD is a mental illness that affects is defined by long bouts of sadness, loss of energy and interest in life, as well as pain without a clear cause. While some people are almost constantly in a state of depression, others experience the symptoms coming and going, sometimes with years between episodes.

Causes of depression are a combination of genetic, environmental, and psychological factors. MDD symptoms are wide-ranging and dominate every aspect of one’s life, but tend to predominantly affect behavior and mental state. However, physical conditions such as headaches, fatigue, and digestive issues are also typical in people with MDD. What are Typical Treatments for Major Depressive Disorder?

The most common treatment options for Major Depressive Disorder are antidepressant medications, such as Prozac or Zoloft, psychotherapy, or a combination of both. While these methods do work for some, antidepressants are known to sometimes have severe systemic side effects. In addition, over 40% of people suffering from MDD have treatment-resistant depression, meaning antidepressant medications have no effect on reducing their symptoms. There is an alternative to these various forms of treatment that is proven safe and is becoming more and more common, known as Transcranial Magnetic Stimulation, or TMS.

What is Transcranial Magnetic Stimulation (TMS)

TMS has been FDA approved for over a decade now and is becoming more and more accepted in medical circles as a reliable treatment for MDD. In short, TMS is a noninvasive treatment option that uses magnetic waves to stimulate parts of the brain responsible for mood regulation. But not all TMS systems are created equal — BrainsWay, an innovative Medtech company, has developed an advanced and effective form of TMS treatment known as Deep TMS (dTMS). This technology is able to penetrate deeper into the desired region of the brain, covering a wider area, and therefore allowing for a more accurate and effective treatment. 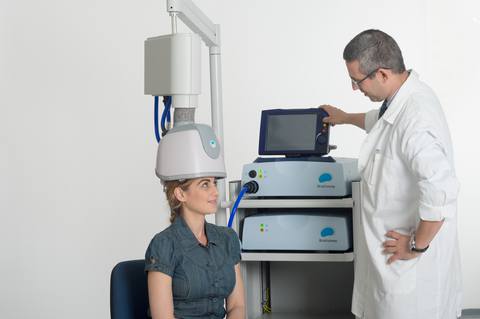 BrainsWay’s dTMS therapy is well-tolerated and clinically proven to treat MDD. During its clinical trial stage, BrainsWay Deep TMS had more than half of patients with treatment-resistant depression achieve remission from their symptoms.

BrainsWay has already treated over 37,000 patients across 17 countries and is expanding throughout the United States and markets in Asia and Europe. As more awareness is being given to mental illnesses and MDD in particular, more attention is being given to the benefits of TMS solutions. As a result, BrainsWay’s dTMS solution is being increasingly sought after by people suffering from MDD who are looking for the best overall option to effectively treat their condition.